Not like I could take you to the train...

Wow, where to start?

Steven and David, my friends who put on Act IV, were in town this weekend, and one of the things we did was watch the Act IV 2002 "documentary" that they've been editing together. There are four DVDs worth of stuff, so we didn't watch all of it, just highlights from everyone's set and a little of the backstage footage. There's a funny segment where Stacey Hankins is interviewing me as I'm knitting a hat to give to Jimmy Chamberlin. (He was supposed to show up that year, but didn't.) I'm all...twenty, all emo glasses and lip gloss and nerves.

I don't like being reminded of my stage fright back then, or of not knowing how to play a show. But I like being reminded of how excited and hopeful we all were, and of how Chicago seemed like a wonderland to us, and I'm really proud of how we managed to pull off our dumb little shows and raise all that money for charity. We were all trying to get here, and then I did, and I got a job and a lease and stuff and suddenly the whole music thing was dead in the water.

I'm trying to figure out how I can get back the hope and excitement, while holding on to what experience and knowledge I've gained since then. How do I do that? Maybe I have to leave Chicago, because whatever else is true, I know I'm in a rut here. I've been thinking a lot about what everyone's been telling me about how Portland might be more conducive to finally getting started in music than Chicago has been. But I have to think really carefully about whether I should go. Before, the question was: will I like Jim enough in October to move to where he is? Now the question is, will I be over him enough in October to move to where he is? I hope so.

We decided we'd try to hang out one more time before he left. He told me he wanted to see me again, so that the last time he saw me in who knows how long wouldn't be a sad time. So we drove out to the sculpture park along McCormick.

At first I thought I wouldn't be able to deal. But then we got to one sculpture which looked like a giant paramecium, with cilia. There was a sign saying "PLEASE DO NOT CLIMB ON THE SCULPTURES" which was all the invitation I needed. I walked around to the other side of the sculpture and peered at Jim through one of the vacuoles, then jumped inside, and we started laughing. Then he took my picture. 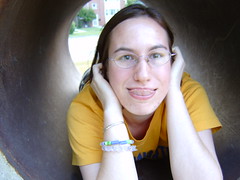 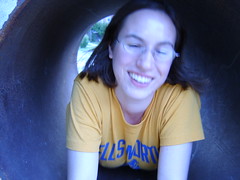 We were there for hours, and as we drove back towards the city, it was dark. I saw one single, enormous white firework go off, and that was it. Must have been the last one. Jim said how weird it felt for him to be leaving. When I could speak, I said, "Tell me about it."

When we got back to my place, I was crying. I looked over and saw a tear slide down his cheek. Then we cried and held on to each other for a long time. The very last thing we did was laugh, though. Then I went inside.

...oh, yeah, and that hat I knitted? I did finish it that night, but it wasn't that good, not even as my less-than-spectacular knitting projects go. I think it finally ended up at the Slave Nation Army here in Evanston. And the shirt I was wearing in the interview (pink, with a big purple-and-white butterfly) probably met the same fate. I didn't miss either of 'em in the least until I saw that silly video clip.