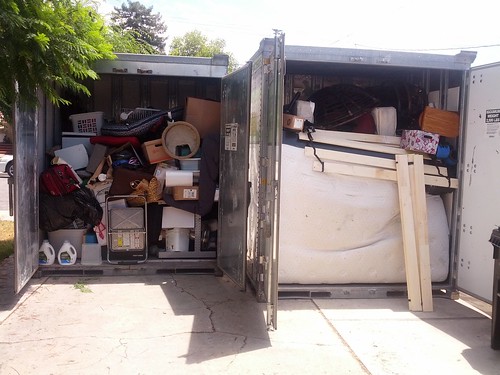 Not much more than a week ago, nothing was packed yet. In the time since then, we packed everything worth keeping into two large crates and sent the crates on their way across the country. Everything that wasn't worth keeping, we gave to friends or family or took to Goodwill, mostly the latter. In the last seven days, we've dropped off so much of our stuff at the Bloomington East Goodwill that I suspect that walking around their store right now would be a jarring experience for anyone who ever spent much time around our place in Bloomington. But I'm no longer around to confirm that suspicion, since, as of two days ago, I live two thousand miles away from there.

The crates arrived today, and we just finished moving everything that survived the trip into the house. (Almost everything did survive. A couple of lamps that I've had since Portland were crushed, a cheap plastic storage bin was cracked, and some of the furniture is a bit scuffed -- those are the only casualties I'm aware of.) Although we have yet to really unpack any boxes, we are in some sense "moved in".

After a total of almost thirty years in the Midwest, plus three in Portland, I'm excited about finally having a permanent address in a place where backyard lemon trees are standard issue (I buried my face in ours for a while; it was heavenly) and where the air is dry enough that shower walls don't turn mildewy by default. I love our house here. It's going to be awesome. I have a much better understanding now of what I want in a house than I did when I found our old place in Bloomington five years ago, and I'm excited to have a second chance at homemaking.

Still, if we do this again, we might get professional movers.