oniugnip and I got married! 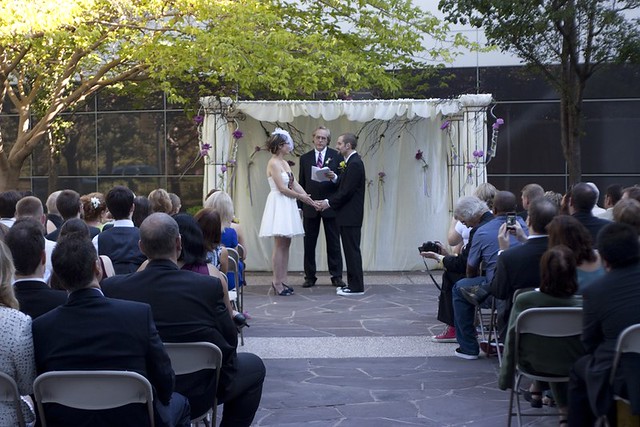 We wrote the ceremony together, with some last-minute help from my dad. The structure of the ceremony, as well as some of the content, was inspired by the wedding ceremony of my friends Ginny and Chris, who were kind enough to make theirs available under a Creative Commons BY-NC-SA license; therefore, ours is now available under the current version of the same license. Remix at will!

The Wedding Ceremony of
Lindsey and Alex

Welcome and Prologue
Keith, Father of the Bride

Welcome, everyone, to Lindsey and Alex's wedding.

This ceremony fulfills many purposes. We’re here to recount and celebrate the loving relationship that Alex and Lindsey created together; we are here to witness their commitment to each other; and finally, we are here to offer our love, support and encouragement to them as they begin their joyful and courageous adventure of marriage.

Lindsey and Alex's choice of venue for today's ceremony is a reflection of their personalities and of how they met and became a couple. Their first encounter with each other was more than seven years ago, in the spring of 2004. Lindsey, a lifelong Iowan, was about to graduate from Grinnell College. Alex, a Florida native, was nearing the end of his junior year at Georgia Tech. Both Alex and Lindsey were -- and still are -- members of LiveJournal, an online community where Internet users keep journals and share them with friends. It was through this website that they met, unaware that their casual acquaintance would eventually lead us to this day. Alex would like to share with you his first LiveJournal message to Lindsey, dated April 26, 2004:

[Alex:] Hey, good evening. (Happy face.) You don't know me, but you did say that you think it's cool when people you don't know post comments. And you've got "K&R" listed as an interest, which is top of excellent. But you look terribly interesting, so I friended you. *shakes hand* Hi, I'm Alex. (Happy face.)

Lindsey and Alex maintained online contact for several years as changes unfolded in their lives. As they moved through jobs, relationships, and cities, a consistent shared passion of theirs was running. One day, Alex announced on LiveJournal that he would go running every day for a month: 30 runs in 30 days. Lindsey found the idea compelling, and posted this comment in Alex’s journal:

[Lindsey:] Let's do it together.

So in November of 2007, Alex and Lindsey embarked on what they called the National Road Running Month project, running every day, recording their routes, and keenly following each other’s progress. And so they went from online acquaintances to online running buddies and training partners.

At the end of the month, Alex was set to travel here to Mountain View for work, and since Lindsey was living in Portland, Oregon at the time, he made a stop to visit her "on the way". A cursory look at a map will tell you that in no sense is Portland "on the way" between Atlanta and Mountain View, but Alex and Lindsey were not about to let geographical details get in the way of their first in-person meeting on the last day of November 2007. Even so, Lindsey didn’t grasp the reality of the situation and therefore failed to meet Alex at the airport at the appointed time. But eventually, she collected Alex, who had been waiting at the airport with admirable patience, mounting anxiety, and a cell phone with a nearly exhausted battery. Thus united, Lindsey and Alex ran a victory lap around Lindsey’s neighborhood in Portland, thereby winning National Road Running Month and beginning their relationship.

Many of you who knew Lindsey and Alex during this time will recall that for nearly two years at the beginning of their relationship, they were living in different cities, separated by thousands of miles. Technology made communication possible, but it was of course a poor substitute for physical presence. They made it their project to see each other at least once each calendar month. Every time they were together, Lindsey made it her project to take a photo, and many of those pictures were taken by some of you who are here. They’ve amassed quite a collection: at the finish line of the Atlanta marathon; on a train headed toward Sapporo, Japan; in a green field in Grinnell, Iowa; on a mountaintop overlooking Barcelona, Spain; and many more. (Lindsey assures me that they’ll be showing these photos during the reception, by the way.)

Over time, Lindsey and Alex became less strict about the photo-every-month policy. Perhaps one reason is that they became more interested in living their relationship than in creating photographic evidence of their relationship. But another reason is that a month stopped feeling like a significant length of time. As fourteen months became twenty became thirty become forty and beyond, it’s become more clear that however many adventures Lindsey and Alex have together, it won’t be enough. They have big plans, and they’re just getting started. At nearly four years, it’s clear that they’re going to need their whole lives to explore the relationship, and will want the support of their community. That necessity brings us to today, where Alex and Lindsey commit to a lifelong bond in the presence of their friends and family. They thank you for joining with them to commemorate this happy occasion.

Next, we’ll hear a reading chosen by the couple. And then, the big moment: Lindsey and Alex will marry each other by exchanging rings and vows.

Reading
Martin Robinson and Lauryn Menard, Friends of the Couple
"Us Two", A. A. Milne
(from Now We Are Six)

So wherever I am, there's always Pooh,
There's always Pooh and Me.
"What would I do?" I said to Pooh,
"If it wasn't for you," and Pooh said: "True,
it isn't much fun for One, but Two
Can stick together," says Pooh, says he.
"That's how it is," says Pooh.

Being with somebody and wanting it to be a permanent arrangement is pretty intense. There’s a t-shirt you can get; it says "being in love is totally punk rock". To want to rock out with a person forever, you must have found somebody pretty special.

So that’s why we’re here. This doesn’t address, yet, why you’re here. We’ve invited you here because we love you, and we trust you. We believe in you. You’re what we believe in. And we want your good wishes, your love, and your support, as we set off together, for the rest of our lives.

If that’s OK with you, please respond by smiling or waving or applauding or something.

OK, good. Let’s do the vows and the bit with the rings.

Lindsey, I will respect you, honor you, care for you, and grow and learn with you, through good times and hard times, as your friend, your companion, and your partner. I will help you when you need a helping hand, listen when you need an ear, and gratefully accept your help and guidance when you have help and guidance to give. I will work so hard to make us the best that we can be, to fulfill our lives together. Thank you for loving me, and thank you for marrying me.

Alex, I will respect you, honor you, care for you, and grow and learn with you, through good times and hard times, as your friend, your companion, and your partner. I will help you when you need a helping hand, listen when you need an ear, and gratefully accept your help and guidance when you have help and guidance to give. I will care for you in the best way that I know how, and when I’m not sure how, I will show up and try my best anyway. And speaking of which, I promise to never leave you stranded at an airport ever, ever again. Thank you for loving me, and thank you for marrying me.

Epilogue and Farewell
Keith, Father of the Bride

On behalf of Alex and Lindsey, I thank all of you for joining them here. There are so many things in life that compete for and demand our attention, so it means a great deal to them that so many have traveled so far, some of you for thousands of miles, to witness these two profess their commitment to one another. Without the support and love from each of you here, and many more who could not attend, these two would not be who they are today, and would not be as prepared for their journey through life together. This event would simply not be possible without you.

We are gathered here in the shadow of the Computer History Museum, which documents and honors technology. Wonderful stuff, technology. It makes our lives better; easier. But there is no better time than at a wedding to reflect on something deeper than what makes our lives easier; no better time than now, as we bless this couple, to consider, to meditate upon, what makes life worth living. As individuals, as nations, as couples, as a planet, our best way forward lies in our hearts more than our technology. Remember this powerful image of Lindsey and Alex as a symbol of love. Go forth and love one another.

Now, I would like to ask the couple to grace us with a kiss, and please join me in congratulating them.

Recessional
Paul Berry, Friend of the Couple
"In My Life", Lennon/McCartney

We had a fabulous reception afterward. Some highlights:

Throughout the afternoon and evening, our dear friend Brett took more than 500 pictures that are available for your perusal; if you were at the wedding, you're probably represented somewhere in there! Thanks for being a part of it.