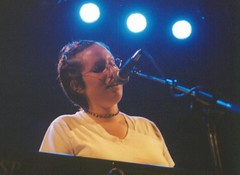 The first Act IV concert happened ten years ago today, on July 7, 2001. I've written about the Act IV project before, but a lot of the links in that post are dead now.1 So, then, to recapitulate past-Lindsey, substituting fresher links where available:

Following a period of a couple of years from about 1998 to 2000 during which being a Smashing Pumpkins fan was a startlingly important part of my life, I played in a Pumpkins tribute concert in 2001 that, to the surprise of most of us who were involved, ended up becoming sort of a Thing. The show happened again in 2002, and together, the two concerts and the various other stuff we did comprised a project called Act IV.

I ought to say something thoughtful and incisive about Act IV, but I don't have to, because in 2003, my sister Maya made an audio documentary about Act IV that pretty well captures what it was all about, and both parts of her documentary are available.

I was only nineteen when I played Act IV for the first time. It was the summer between my first and second years of college. I hadn't yet started studying computer science.2 I hadn't even met Alex online, much less in person. In other words, I was a tiny baby. But I'd like to try to explain why and how I ended up involved with the Act IV thing, and to do so, I have to back up even further, to when I was an even tinier baby.

Many of the formative experiences of my early teens happened during a total of three weeks, spread out over three years, that I spent attending a summer camp held on the campus of a certain small liberal arts college in a rural town in Iowa. For each of those three years, the one week per year I spent at camp was unquestionably the least awful week of the year. The first summer I went to camp there was, I'm pretty sure, the longest time I'd spent away from my parents. The second summer I went, I kissed a boy for the first time, in the basement of one of the campus buildings. It was the sort of thing that never in a million years would have happened to me back at home. In fact, he and I declared our so-called "love" for each other, to much eye-rolling from my mother when I tried to tell her about it, and we carried on a short-lived long-distance "relationship" that ended not long after I brought him to my ninth-grade homecoming dance back home.3

The third and last time I went to camp, I was sixteen, and it was the summer of 1998. My roommate at camp that year was a girl named Lauren. I already knew Lauren from my previous times at camp, and I admired the hell out of her; she was my age, but much more sophisticated than I was. She had brought her little stereo and a couple of CDs with her to camp, and we had them in our room. That alone was kind of novel to me. Despite self-identifying as a musician and as someone who loved music, I didn't really own any recordings of music that I'd picked out for myself, because, at age sixteen, I was still very much afraid of liking specific things. Lauren, apparently, didn't have that problem -- it was one of the reasons why I admired her -- and I was happy to just ride along on the wave of what I saw as Lauren's taste and sophistication. For a week, I thought, I would get to share a room with someone who somehow knew things about pop music. No one at camp would know that I didn't know those things, too. No one at camp would need to find out that I was nowhere near as cool as Lauren was. For a week, I would pretend to being cool enough to have some music I liked, and maybe not even Lauren would be the wiser. I had it all planned out.

Then my plan was spectacularly ruined: I fell in immediate love with one of the albums that Lauren brought. For the last few hours, I've been scouring the web for anything that I can point to that might explain how I reacted to Adore when I heard it. None of the reviews I've found are apropos, because they all situate the album in the context of everything else the band had produced up to that point. But I had never heard any of the Pumpkins' other stuff. I didn't know that the band had been around for a while, or that they were hauling around a lot of baggage; I didn't even know who the band was. You could argue that I was sixteen and impressionable, and you'd be right. You could argue that the late 90s were a terrible time for pop music and that I was soaking in that, and you'd also be right. (That other album that Lauren brought to camp was, I recall, a Creed album.) But I didn't know any of that then. The only thing I did know was that I had never heard anything like what Lauren played from Adore, and that it sent me into undignified paroxysms of joy. I actually do still think it's one of the most underrated albums of that time period, and almost certainly the most underrated album the band made.

I'd like to say that I immediately went and bought it after getting home from camp that summer, but, in fact, it still took me months to develop the courage to do so. What if it wasn't as good as I remembered? And we'd only listened to a few songs at camp -- what if I didn't like the rest of the album? And where did people even buy music, anyway? My family lived on a farm in rural Iowa. The nearest thing approximating a mall was a 40-mile drive away. But I finally made the drive, one weekend in November, and I paid something like $17.99 plus tax at some horrible mall store, and I drove back home with my treasure, and I listened to it over and over and fell harder and harder in love. Then, over the rest of that winter and spring, I gradually and ecstatically discovered the rest of the band's catalog. I remember standing in a used CD store in Waterloo, Iowa, in February, finding Siamese Dream in the racks, and trepidatiously bringing it over to one of the listening stations. I'd pick two songs at random, I figured, and if they were good, then I'd know that I'd picked a good band to like. If not, I'd have to start all over. My two random choices turned out to be "Today" and "Rocket", in that order, and by the end of them, I was a puddle of happiness on the floor.

And then I figured out that there were shows, and that there were bootlegs of those shows, and a sprawling Internet community full of people who were all simultaneously also having undignified paroxysms of joy. Not only had I managed to discover something that I really genuinely enjoyed, but there were other people who enjoyed it with me: this was new, and it was really wonderful. I was a much happier person for the second half of high school. And that's how it went, until the Pumpkins broke up just as my first semester of college was ending, in December of 2000.

We weren't really ready for them to go.

There is, apparently, a band that still calls themselves the Smashing Pumpkins now, but they're not my Pumpkins. My Smashing Pumpkins broke up over ten years ago and will never get back together. They're done. That's the reason we did Act IV -- because the band was done, but the fans weren't. We were, in fact, just getting started. I don't want to overstate the importance of this particular band; it probably could have been some other band that made this all happen for me. But, for better or worse, this band was the catalyst for my finally figuring out that I didn't have to be afraid to like things, and that I had nothing to fear from pop music. Before the Pumpkins, I didn't think that pop music was for me. Now, I'm pretty sure that I'm exactly who it was for.