On the morning after race day, Alex

oniugnip and I got up early and snuck out of Graham

cola_fan and Xana's apartment to give them and their roommates a little time without us underfoot. After some meandering, we found Plaça del Sol, the little square where we'd eaten falafel the previous night. It happened to be a holiday from work that day -- something to do with Carnaval -- and the plaça was full of people.

We got some bagels (the last two that the bagel shop had!) and orange juice (squeezed when we ordered it!), found a seat, and watched people of a great variety of ages, all using the space in different ways. I was impressed by the fact that instead of hovering over their kids, parents calmly sat and ate breakfast while their kids ran around kicking soccer balls.1 Meanwhile, in the middle of the square, a couple played the guitar and xylophone while their tiny baby leaned out of his stroller and watched, enthralled. It was one of the best public spaces I've ever been in. 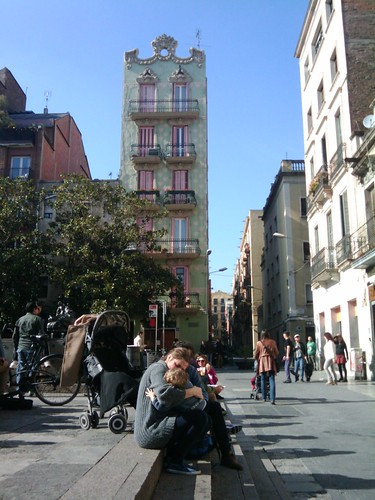 Eventually, we headed back to the apartment and found Graham and Xana awake and ready to head out on the metro for more sightseeing. We were still moving quite slowly and stiffly, but Xana, who's an architecture student, insisted that we couldn't come to Barcelona and not see Park Güell.

It was a steep walk up the hill from the metro station: 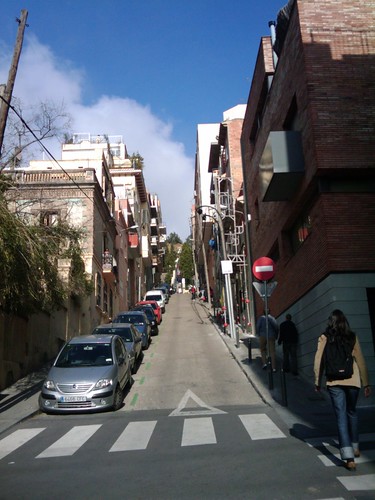 But the view was well worth it: 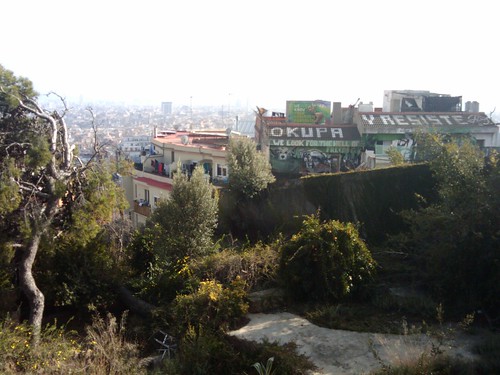 I don't even know where to start with that picture, really. I mean, we've got a Barcelona roofscape in the background, with the sea beyond that. In the middle distance, we've got laundry and anarchist graffiti. And then there's the fact that in order to take the picture I'm leaning against a wall that Gaudí designed. Just...if you get the chance, go to Barcelona, okay?

We took the requisite pictures of the buildings near the entrance to the park: 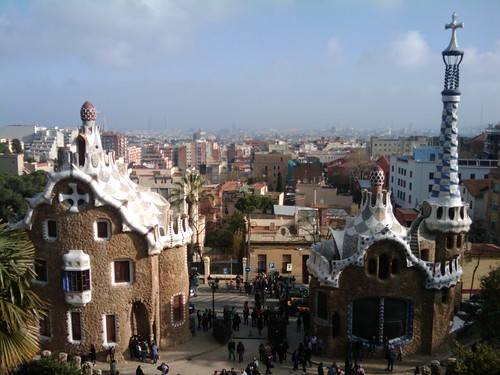 Finally, we wandered out into Carmel and to the top of another hill Graham knew about. We all kept questioning the wisdom of doing so much uphill walking on the day after the race, but wanting to see what was at the top kept winning out. 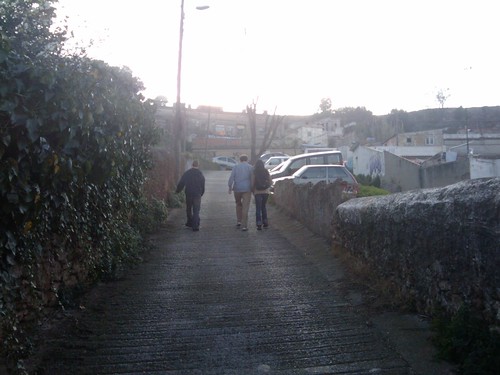 At the top, of course, was another great view. Graham took some stunning pictures of Alex and me: 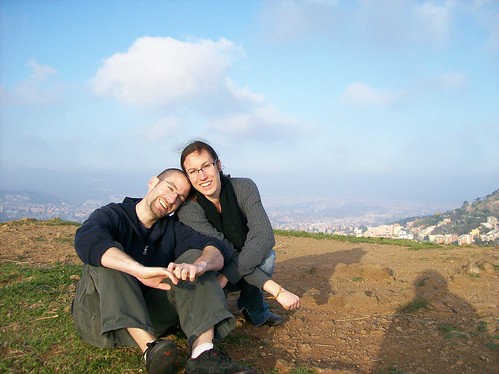 We walked back down the hill and ducked into a little bar to coffee up for the trip home. We had intended to drink our coffee quickly and leave, but it was so friendly there that we ended up staying for a good two hours and having a lot more than coffee. A local guy introduced himself to us as Manolo and proceeded to pay for our round of drinks. According to protocol, Xana explained, we now had to pay for his drink, but the only acceptable way to do it was indirectly, by way of the middle-aged woman who was serving us and who may have also been the owner of the establishment. Then Graham noticed that they had homemade vermouth, so we ordered a round of that and a plate of fried potatoes with allioli, which was incredible. Then some guys came in to deliver a pallet of spinach to the kitchen, and they totally gave us a handful of raw spinach to eat. And then Manolo sent some chicken over.

In between all these interactions, Graham and Xana kept quietly telling Alex and me that there was no way that any of this would have ever happened in central Barcelona, where people were tightwads and kept to themselves, and how wonderful an idea it had been for us all to come out here to the edge of town. We wholeheartedly agreed. When we left, Manolo called me muy guapa. I think he may have actually pinched my cheek. It was a surreal and somehow perfect end to the evening. We headed home on the bus, marveling at how we'd managed to come across such a great place by accident.