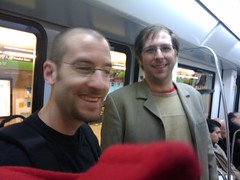 oniugnip and I arrived this morning after a remarkably easy trip: no stops between Atlanta and here. After my only other international travel experience, in which Alex and I were fingerprinted and questioned at Narita, I was impressed by how easy it was to get through customs at the airport. There was just one form to fill out, which a customs official barely glanced at before waving us on through. Graham

cola_fan met us and shepherded us onto a bus, then the metro, and finally to his lovely apartment right along Avinguda Diagonal.

Since this is my first time in Europe, Alex asked me to keep a list of things that are surprising. Aside from customs being easy, the one thing I was utterly unprepared for was cheek kissing. I stiffened up when the first guy that Graham introduced me to -- the friendly doorman in his building -- pulled me toward him, and it was still kind of awkward when Graham's lovely girlfriend, Xana, did the same when I met her a little later. I feel maladroit and uncosmopolitan for having allowed myself to be surprised by this. On the other hand, it feels weird that I'm receiving these kisses and Alex isn't; the gender binary that that implies is not something I particularly want to feel comfortable with.

I'm also having some language awkwardness. I studied Spanish in high school for four years, but with three different teachers during that time, all of whom more or less started my class over at the beginning, I really didn't get very far. (Not to solely blame the teachers; I could have pushed myself to learn more and didn't.) So my Spanish is nearly non-existent. Still, this is a lot easier than the first day in Japan was: I'm catching spoken words here and there, and I can more or less read things like maps and menus. Actually synthesizing any Spanish (much less any Catalan) is still too much for me. I clammed up completely when we went out for breakfast with Graham and Xana, and I still haven't made it much past "Hola". Luckily, Alex's Spanish is quite good, and he can cover for us both. 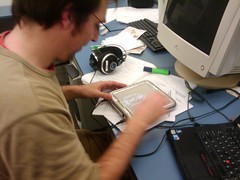 After breakfast, Alex and I had a long nap and a shower, and in the afternoon we meandered over to Graham's university to meet his colleagues in the Music Technology Group and see demos of some cool gadgets. After that, Graham had to review some conference papers, so we headed back to the apartment on the metro; I was proud of our navigational skills. Graham joined us back here a little while ago, and now we're having tea and contemplating going out to a bar. It's really great to be here. Graham's European colleagues think it's crazy that we're only staying for five days; to them, a proper vacation should last about four or five times that long. I think we could stand to learn from them!