oniugnip and I spent the last couple of weeks of 2010 on road trips that took us to Tallahassee, where Alex's parents and their spouses live, and to Atlanta and Pittsburgh, where pockets of our friends congregate.

We started driving on December 20. Nine hours in, we stopped off in Atlanta to have dinner at the Chinese Buddha1 with Rob

markluffel and stock up on hugs and fried tofu for the remaining four hours of the journey to Tallahassee. We finally got to Tallahassee at two in the morning on the 21st -- excellent timing for getting a look at that day's total lunar eclipse -- and Alex's mom Lenoir came outside to meet us under the more-visible-than-usual stars.

We spent six lazy, wonderful days lounging around in front of the fire, eating fruitcake, going running in the woods near Lenoir's place, visiting the theater where she stage-manages and acts, and honing our gift-wrapping skills (and, shortly thereafter, our gift-unwrapping skills). We made frequent side trips to Alex's dad Jim's place, where our gift-unwrapping skills got additional practice and where Jim, Alex, Alex's sister Natalie, and I sat in the hot tub telling stories until we were shriveled beyond all recognition. Although it wasn't exactly cold in Tallahassee, it was kind of chilly -- ideal running weather -- and on the day we left, actual snow fell for about fifteen seconds, inciting Lenoir's entire household to reminisce about the last time it snowed, which seems to have been in roughly 1989. I really enjoy spending time with my out-laws, and they keep on giving me lovely warm mittens and sweaters and scarves and socks so that I don't perish up here in the Frozen Northlands.

On the 26th, we headed up to Atlanta again. (You know you're in the South when it's "up" to Atlanta. Of course, you also know you're in the South because you're driving through pecan orchards the entire way.) In a fantastic stroke of luck, we happened to pass through Macon, Georgia precisely when Brett was there, also on holiday travels, with his family. It was great to be able to spend some time with Brett, more so because we hadn't been expecting it. His dad told war stories from the days of mainframes and playtested his nascent board game, "Greed or Fear", on us. We hit the road again with a lot of reluctance.

Back in Atlanta, we got to see all the usual suspects and some of the unusual ones: Rob, Mark, Lisa and JD, Emily and John, and that guy with the dreads who works at Octane and is the 28th best barista in America or something. While we were at Rob's place in Home Park, Rob asked me to compose a haiku for the purpose of some inscrutable Facebook game he was playing. I came up with

Visiting Rob's place:
every object within sight
is an instrument

which was completely true, with the possible exception of Rob's diverse and ever-expanding collection of Four Loko cans. Rob was also responsible for introducing us to Hankook Taqueria, which we spent the rest of the trip trying to tell the rest of our Atlanta people about, only to discover that everyone else had already been there and was actually sort of tired of hearing about how amazing it was. Later that day, we went to Strick's annual 3DX party on the 27th at the Psi U house, which was exactly as great as it always is. The drive back home to Indiana included the by-now-standard stop at Waffle House2.

Back at home, we had enough time to do a little unpacking and house-tidying before acquiring one (1)

chrisamaphone (with bonus chrisamaparent!) on the 29th. She came complete with the Raisin-Free Oatmeal Cookies™ and Giant Pile of Luggage™ chrisamaccessories. Brief Bloomington adventures included the Turkish place, a foggy run around town, and introducing Chris to Metalocalypse; then we all took off for Pittsburgh the next day. Nobody expects Ohio to go on forever, but it does, particularly when accidents all but close the interstate. Then there was a long, windy, foggy stretch of road as we got into Pennsylvania that I think all of us could have done without, particularly Alex, who was driving.

At long last, we got to go through the Fort Pitt Tunnel into Pittsburgh, which, as Chris' mom had promised, felt kind of like being born. In that way that happens when you're in a strange city and you're not sure where you're going, but you're being swept along with a whole bunch of people who do, we ended up at Church Brew Works with Chris and Lea and David and Rob

simrob and Rachel and Jamie and Dan and Tom and who even knows who. I think Alex would have preferred a temple of coffee to a temple of beer, but we enjoyed ourselves, and I perhaps foolishly agreed to go running at 9 a.m. the next day with Jamie, Chris, Rob, and Alex. I had gone running with some of the same people at ICFP back in September, and it had kicked my ass then, too, but I guess I'm proud that Pittsburgh only kicked my ass as much as Baltimore did, considering that the route through Pittsburgh was rather hillier. Thankfully, the fast people waited for me at the tops of the hills, and Alex was glad to have found a challenging running partner in Jamie.

The nice thing about running in the morning is that you still have most of a day when you're done. After a search for lunch that ended successfully at Dozen, Alex and I delivered Chris to the airport. At that point, we were starting to miss home and the cats and thinking about heading back to Bloomington, but several people convinced us to stick around Pittsburgh for another night. We spent the late afternoon and evening walking from Bloomfield to Squirrel Hill in the unseasonably warm weather, then made a detour to check out the CMU campus, which is much more modern than IU's campus and gives rather less of an appearance of having been carved out of a single block of limestone. We also gave ourselves a tour of parts of their completely kick-ass new CS building, which we wouldn't have been able to get into had some guy not held the door open for us. Thanks, guy! 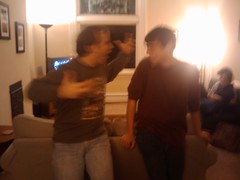 Eventually, we made our way to Dan's place for the party. I'm glad that we stayed for it. I hadn't participated in a power hour since undergrad, nor would I have imagined that I would ever want to again, but it actually worked pretty well as a way to conclude 2010 and welcome the new year.3 Also, once you've been taking shots of PBR for an hour, cheap champagne at midnight is surprisingly delicious. Thus lubricated, we stuck around for another three hours of celebration. Alex and Tom, in particular, talked for a very long time. I'm starting to think that they should just get married.

It was a long drive back to Bloomington the next morning, but at least we weren't hindered by freeway accidents. Sitting on the doorstep when we got back were packages containing a lovely blue sweater -- another gift from Alex's mom! -- and a copy of ATTaPL, Alex's Christmas gift for me. He may have noticed that I spent a nontrivial part of 2010 borrowing Amal's copy. Maybe soon I'll be able to convince myself that I'm actually allowed to make marks in this one.

It's been a week now since our travels ended, and the new semester starts on Monday. As of today, I've been in slack mode for three weeks. I looked at my fingernails this morning and realized that they were long, smooth, and healthy-looking, not stress-bitten like they often are during the semester. It's sort of like I passed quals and then spent three weeks relaxing, running, seeing friends and family, and eating good food, or something. Now to see if I can keep doing those things and do research, too. Happy new year!