I've been alternating bettween ATTaPL and TaPL all weekend, and I finished reading the latter a little while ago, although I skipped over most of the coinduction stuff in chapter 21 and skimmed pretty quickly over a lot of the OO stuff in the chapters near the end. It is probably going to feel odd the next time I look at a printed page that isn't in Lucida Bright. 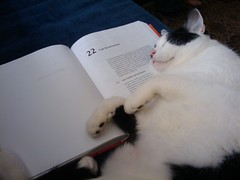 After reading chapter 1 of ATTaPL, I think it's strange and interesting how the algorithmic1 typing rules for linear types are actually sort of easier to read than the declarative ones. Could that be because linear types are an inherently procedural notion? Oh, and there's one thing I don't understand. Let's assume, as the first part of the chapter does, that the resource that we want to ensure linear use of is memory on the stack. In that case, what exactly is guaranteed about a program that makes it past the type checker? Does it just guarantee that it's possible to implement the compiler and/or run-time system in such a way that that program will use the stack linearly? In other words, is typability a necessary but not sufficient condition for actual linear use of whatever resource we're talking about? Because, you know, here we are going to all this effort with the typing rules and then the chapter is like "Oh, and also, let me tell you about this thing called...*drumroll*...a tail call!"

As for chapter 10 of ATTaPL, I sort of gave up after a while. It got off to a wonderful start2 and then gradually became completely impenetrable, so I just went back and read TaPL 22 again, and that was much better. (Mylk helped, as you can see.) I think I'll be okay if I can sort of hand-wavily talk about constraint generation and unification. There's still a big chunk of the list to plow through. I ought to read the F-to-TAL paper3 next -- I'm not sure I've ever actually read it start-to-finish -- and I could stand to at least glance over the Findler and Felleisen again. That still leaves about five things that I really have to read before Wednesday, and about two others that need a a minimum of a quick look.

And then I guess we'll just hope for the best. Late last week I sent Dan a spastic middle-of-night STEP-INDEXING IS FIXPOINT THEORY!!! email that he was pretty pleased about. I think my committee will agree that whether or not I'm good at this stuff, at least I'm enthusiastic.