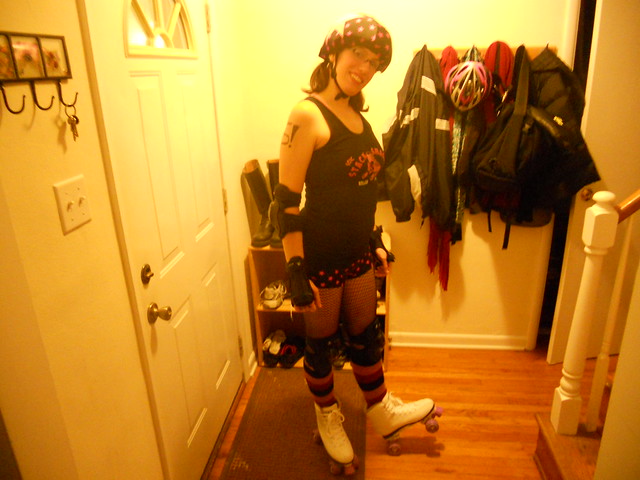 I already owned the leg warmers and the fishnets, but I shelled out for the pads, helmet, and skates. (It was a good thing I bought actual protective gear, because I was wearing the skates the entire time I was at the Mad Scientist Ball last night, and although I never fell, there were enough low-friction floors and enough alcohol at the party that it certainly wouldn't have been out of the question.)

The key part of the costume was the shirt. UberPrints.com, it turns out, lets you make a one-off shirt design and have it printed and delivered to you in a matter of days. I'm no designer, but I was able to come up with a passable shirt design using just their online tools, with the fonts and clip art that they had available. (They'll also let you upload a design that you've created offline using the fancier image manipulation software that people who do this kind of thing a lot presumably know how to use.) Credit goes to Akiva

aleffert for coming up with the name STACK SMASHERS. (Y BOMBINATOR was my own idea.) The remaining bits of the costume came from Derby Skinz. Never did I think I would actually find myself wearing ludicrously tiny black booty shorts with hot pink stars on them; truly, life is full of surprises. Those and the helmet cover ("helmet panties", they call it, in fact) were custom-made to order, and I cut it really close -- they showed up via Priority Mail less than twelve hours before the party.

This costume was expensive: $48 for the small stretchy scraps of fabric, $40 for the shirt (the reason it was so expensive was because I wanted a several-color, both-front-and-back design, and because I asked for fast shipping), and $70 for the skates and protective gear. However, now I own roller skates and pads which I intend to use, and I certainly intend to wear the shirt, so I'm telling myself that the cost was somewhat justifiable. Plus, it's hard to put a price on the looks I got.

If there's interest, I'll have some more STACK SMASHERS t-shirts made. If a dozen people want one with just the design on the front, we can have them screen-printed, which will be better quality than the digitally printed one I got, and it'll also cost less -- around $20 per shirt or so. A couple of people have expressed interest so far. Want one? 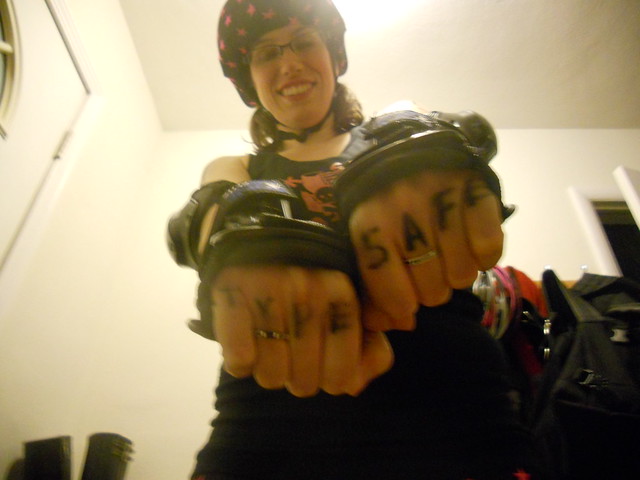