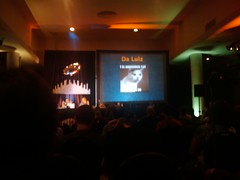 The weekend before last, I went to some of The Next HOPE while in New York to see Alex

Hanging around at HOPE was fascinating. It made me think a lot about all of the meanings of "hacker", and about how this hacker culture makes a point of distinguishing itself from that one. If anything, I've always identified more with the former, but one thing I appreciated about the latter at HOPE was the importance of humor. Throughout the weekend, I noticed humor smoothing rough social interactions and making difficult things easier to learn. I noticed that, other things being equal, people at HOPE valued doing whatever would be the most hilarious. Humor is something I care a lot about, something I try hard for in the things I make, and it seems to me that my side of hacker culture could stand to value it a little more. ESR's how-to-become-a-hacker manual doesn't explicitly mention humor, not even in the "style points" section. Maybe it should. 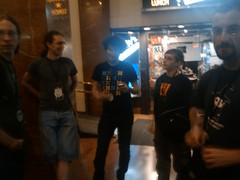 Not all of HOPE was great. There were parts of it that I didn't care for, like the fact that the much-hyped "Social Engineering" panel seemed to me to be little more than a bunch of middle-aged guys making prank calls, with an audience to mindlessly egg them on. And although I wasn't there, I hear from Chris

chrisamaphone that the Lisp talk was pretty bad; she said that the guy couldn't run a single line of code.1 Still, there seemed to be cool stuff going on the whole time we were there. For instance, I saw a talk about circuit bending which I liked a lot, despite not being able to understand most of it.2 But the best part of the weekend was getting to meet and spend time with many, many awesome people who all turned out to be a degree or two from people I already knew. We would see some stranger wearing a yak.net shirt, and moments later, Strick would appear. Or two people would be having a conversation and I would gradually become aware that they were talking about this. Or Alex would introduce me to some people and then one of them would turn out to know Wren

winterkoninkje. (In fact, all during the conference I kept thinking I was seeing Wren in my peripheral vision, but it would actually turn out to be one of several dozen people who simply dress like Wren.)

I have my HOPE badge stuffed in my sock drawer, now, because its red LED is still gaily blinking away -- joined occasionally by a green one -- and there's not really any other place I can put it in this apartment where it won't keep me awake at night. Of course, I could probably touch a piece of conductive material to a couple of pins and make it so that it will never blink again -- but I don't want to.