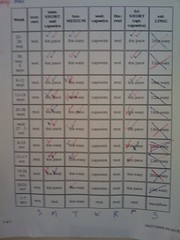 oniugnip and I ran a marathon yesterday! This was my fifth marathon, and the second one we've done together.

I hadn't been planning to set a particular time goal, although I reckoned it would be nice to beat my previous record of 4:39:46. The day before the race, though, I saw that there would be an official 4:30 pace group and decided that I might as well go for it. This was an ambitious goal, considering how haphazard my training had been.1 I had missed several of the long runs, and I hadn't even gotten around to doing my traditional 20-mile run until a week before the race; usually, the recommendation is to do your longest training run two or three weeks before, so that you'll be well rested. But I'm about ten pounds lighter than I was when I ran the 4:39:46 last year, which I figured could only help me, and I wanted to see what running with a pace group would be like. 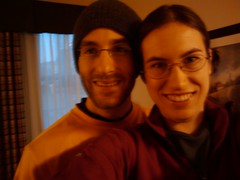 For the first several miles, I felt great. I actually got out well ahead of the 4:30 group -- a bad idea, in hindsight. At mile seven, I had to take a bathroom break, and when I emerged from the bathroom, Tom and the pace group were right there. I should have taken the hint and stayed with them, but unfortunately -- and I think this was my big mistake -- for some reason I felt the need to get out in front of them again. Around mile eight or so, I found some fellow 4:30-ers who had also gotten out in front of Tom, and we all started pushing even further ahead together. I was able to stay with them through the halfway point, and we were feeling pretty good, but I started lagging at around mile fourteen. I rallied and caught up with them once, but I wasn't able to sustain it.

Meanwhile, Tom and the steady 4:30-ers had come up behind me. I was able to hang with them until about mile seventeen, and then, well, things just got tough. My legs were sore and stiff, and an angry, painful blister was developing on the pinky toe of my right foot. I fell far behind the pace group, although I could still see Tom waving his sign and hear him yelling encouraging things. I didn't actually stop running, but it's safe to say that I was no longer interested in speed, just in finishing. Mile 23 was probably the longest mile of my life. It was on a long, straight stretch of concrete with no shade. The wind was blowing against us, and my blister hurt like hell. I lost sight of the 4:30 group entirely. In the last mile or so, I was able to pick it up a little, but not much; I had a final time of 4:44:55. Not my best, not my worst. And now I know what it feels like to have gone out too fast. (To wit, it feels fucking awful, but this was a new experience for me; usually, I err in the opposite direction and save too much for the end. It's good to learn one's limitations.)

Overall, it was really a pretty good race for me. I spent much more time chatting with and getting to know my fellow runners than I had done in any previous marathon, and that was pretty cool. Part of the reason I was able to pick it up at the end was because a guy named Paul, whom I'd been running next to for most of the race, was cheering me on. Thanks, Paul!

Also, the race was in Indianapolis, and to be quite honest, I thought that the course would be boring and ugly, but I was astonished to realize that Indy is quite beautiful. I was able to appreciate it even through the raging pain in my toe. It didn't hurt that the weather was perfect, either. Oh, and we stayed at the downtown Hampton Inn, which is probably the nicest Hampton Inn that has ever existed; it's in a beautiful, ornate 1929 building, and our room, for some reason, was a gigantic two-room suite with a great view and a king-sized bed.

We drove back to Bloomington in the late afternoon yesterday and more or less inhaled a large broccoli/pineapple/jalapeño pizza from Mother Bear's. Alex then curled up and slept while I struggled to finish my due-at-midnight AI homework, which is usually the way of things. Thankfully, today was a day of rest. We went out for an extravagant brunch, and we've spent the majority of the afternoon energetically punching and kicking each other in Tekken, a hand-to-hand combat video game, which is amusing considering that neither of us are having a particularly easy time walking.