In which my secret fangirl nature is further revealed 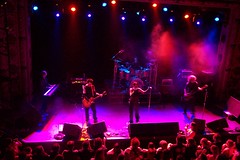 I'm not sure how I managed not to find out about this until now, but it turns out that I'm in an article on the Smashing Pumpkins website about the Act IV project. Following a period of a couple of years from about 1998 to 2000 during which being a Smashing Pumpkins fan was a startlingly important part of my life, I played in a Pumpkins tribute concert in 2001 that, to the surprise of most of us who were involved, ended up becoming sort of a Thing. The show happened again in 2002, and together, the two concerts and the various other stuff we did comprised the Act IV project.

I ought to say something thoughtful and incisive about Act IV, but I don't have to, because in 2003, my sister Maya

leadsynth made an audio documentary about Act IV that pretty well captures what it was all about. Happily, both parts of her documentary are now being hosted on the Smashing Pumpkins website and are linked from the aforementioned article.

oniugnip and I are playing a show here in Bloomington that will be the first real show I've played in years. I refuse to act blasé about this. In fact, it's earth-shattering enough to make me use Twitter.

(Update: In case you care, in 2011, I wrote more about the aforementioned period from 1998 to 2000 in which being a Smashing Pumpkins fan was a startlingly important part of my life.)