It is, in fact, in the middle of our street. 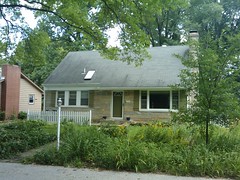 As of today, Alex

oniugnip and I have completed the majority of the paperwork for the house we're renting. Living in the future is pretty cool: I had sent Alex a PDF of the ten-page lease agreement, which he printed, initialed, signed, and popped into a machine that magically turned it into a TIFF and emailed it to him. He then forwarded it to me to print, initial, sign, and hand over to our landlord and landlady feudal superiors landlords.

It's clearly going to take me a little while to get used to this "renting a house, not just a part of one, from people who do not also live in it" thing.

The house has an upstairs and a nice back yard. It's partly made of stone, but this is nothing novel in Bloomington, where limestone is so easy to come by that they build such lowly edifices as convenience stores, ATM kiosks, and the computer science building out of it.