I got my first laptop in November 2005. I like to joke that mine was, in fact, the last 15-inch PowerBook G4 that came off the assembly line before Apple stopped producing them and switched to Intel chips -- the last gasp of a nearly-extinct species. But while it's fun to make fun of my own bad timing with regard to technology, I don't really think I was all that unlucky. By November 2005, it seems to me that Apple had more or less perfected the craft of making PowerBooks. It was a really, really nice computer.

I don't like to attach too much meaning to objects, but that laptop was special. Getting it marked my arrival in Portland and the beginning of a period of proper programming jobs instead of the CSS-grunt job I'd had in my first year and a half out of school. I had never owned a laptop before, much less a Mac. It was the shiniest and most expensive item I had ever purchased for myself, but it turned out to be absolutely worth it. After I started using it, I didn't even bother to power up my Gentoo box for two years.

Not too long after I got the laptop, I was given a secondhand bike. I hadn't ridden a bike since I was a kid, and I started out tentatively pedaling around my neighborhood in southeast Portland, but eventually I was able to cover much of the city. The combination of having a laptop and a bike changed how I lived. Instead of working from home, I could work from anywhere. The Portland winters weren't warm, but they weren't as brutal as the Midwestern winters I was used to -- and having a warm PowerBook strapped onto my back made winter rides more pleasant. I still ride that bike nearly every day. 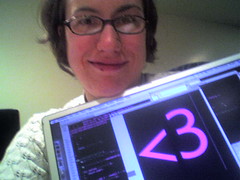 When the startup I was working for went under and I went looking for a new job in June 2006, I think that the laptop, together with my new bike-powered mobility, actually helped me get my next job. The interview took place in a coffee shop (since the company at which I was interviewing also had no office in Portland), and the two guys interviewing me had also arrived by bike and were typing on their Mac laptops. It was less like a job interview than a friendly conversation. When I walked out of there, I was employee #3, despite never having written Perl before. (I learned. Kind of.)

Eventually, in January 2007, that company gave me a little white Intel MacBook, which I used until it was stolen from my house a year later along with two laptops that belonged to Paul

stereotype441. The PowerBook was not among the stolen, and now I started using it for work again. It was slower than the MacBook had been, but otherwise, it worked great. And switching back was a breeze -- one svn up and I was good to go.

My job eventually did give me a nice replacement laptop for my last four months with them, and I also overhauled that old Gentoo desktop machine, installed Ubuntu, and started using it again. But through all of this, the PowerBook -- which I had been using to make the podcast for years by this point -- continued to soldier on. It came to Japan with me in March, then to OSCON with me in July after I left my job. I thought about getting a new laptop for school, but why? The PowerBook was working fine. So it came to Bloomington with me in August, and I started using it more than ever. I did all of my homework with it. I traveled with it constantly. By the time spring came, it was out of warranty, it looked pretty clunky next to the newer laptops everyone else seemed to be carrying around, and I was always being offered power cables that didn't fit because my computer had the older, round power port design. But it kept working day in and day out. 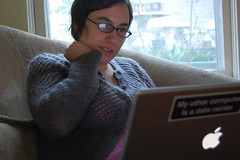 A couple of months ago, in March, I carelessly threw my bag on the floor, having forgotten that there was a computer inside it, and put a dent in the side of the three-and-a-half-year-old PowerBook. The damage turned out to be only cosmetic, and I was actually able to whack it back into shape myself, but I started to become nervous about being just one more careless moment away from not having a usable laptop, especially since the PowerBook was no longer under warranty.

oniugnip had asked a few times over the last year if I wanted a new laptop. I had hitherto resisted. But my birthday was coming, and the dent incident had scared me, and the new MacBook Pro was really, really shiny. So I asked, and he ordered one for me. It arrived via FedEx a few days before my birthday, and I was excited. But then, a strange thing happened: I didn't want to open the box.

I suddenly felt embarrassed about having given in so quickly to the get-new-stuff! urge. I looked around and saw that not everyone had a newer laptop than me. I remembered how I had gotten by just fine in undergrad without a laptop, which was what some of my students were doing now, and I felt sheepish for ever having thought that the PowerBook wasn't enough. I even started to feel perversely proud of the PowerBook's clunkiness and proud of myself for using it, particularly for writing my compiler with it. (Who writes an x86-64 compiler on a three-and-a-half-year-old PowerPC machine? I do, thanks.) So it was a few weeks before I even unpacked the new laptop, and only then after much entreatment from Alex, who didn't understand why I didn't want to use my nice new laptop, which I had asked for, after all. I couldn't blame him -- I didn't understand, either. I made halfhearted excuses about not having time to move my stuff over to the laptop, but that wasn't really the reason at all. 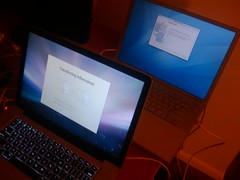 But he did finally convince me to open the box, if only to make sure that nothing was wrong with the new laptop. I unpacked it, powered it up, admired it briefly -- and then packed it right up again until the semester was over. Finally, on May 9, I unpacked it for the second time and transferred my stuff over to it, which ended up being a fast and easy process after all. I took off for Atlanta the following morning, and I've been happily using it every day. It's a state-of-the-art computer with all the bells and whistles. It's pretty much the nicest present anyone's ever given me. It's beautiful. But I think of my PowerBook, languishing back at home, and I feel a little unfaithful. It never did anything wrong!

So I wrote this love letter. bookofpower, you've been with me through good times and bad. You've survived theft, international espionage travel, and dumb software jobs. You've been in and out of dozens of gray plastic bins. You've moved across the country with me. You've been dropped, spilled on, and pushed to the breaking point again and again. You've had dumb stickers affixed to you, and you've never complained. Thanks for being my first.