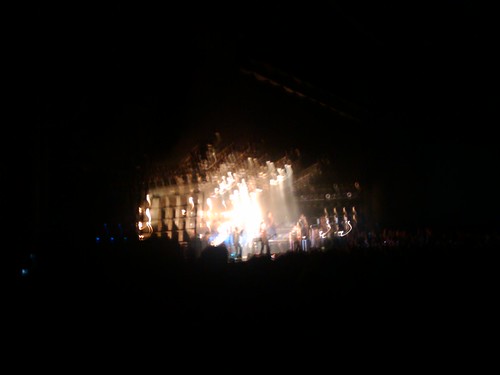 We screwed up. We thought that Nine Inch Nails was headlining and that Jane's Addiction was playing second of three. That's what one would expect, right? But no. So we show up late, and then as we're arriving we hear Trent singing and we dash inside, and luckily everyone's very polite and doesn't cavity-search us, and we get to our seats (which we find to be occupied by other people, but we find empty ones close by) in time to catch the last part of their set. Saul Williams comes out for a couple of songs, and it's great, and we scream and jump up and down during "Head Like a Hole" and I take terrible photos, and finally they go off and we apologize to each other for not showing up sooner, and I go use the restroom along with several thousand other white girls in their 20s who have facial piercings.

Before too long, Jane's Addiction comes on. I've never been especially into this band. But it occurs to me that the last time I went to a Big Arena Rock Concert™ was almost nine years ago, and I realize with a start that it is possible, and probably ultimately more fulfilling, to just be an ordinary person who goes to big arena rock concerts in search of entertainment or maybe of art, as opposed to a fanatic who goes in search of a religious experience. Besides, it's just fun to watch grown men running around and jumping off of drum risers like they're rock stars or something. And I had no idea Perry Farrell was so sassy, especially by contrast with his Traditionally Masculine bandmates. And, as Alex points out, Dave Navarro is more or less the Prince of Persia.1 And we escape without buying any black T-shirts at all!