oniugnip and I are in Iowa with my family, the snow, and the sky. I think I broke his head earlier tonight merely by pointing up while we were standing outside in the dark. They've got stars out here, you see. 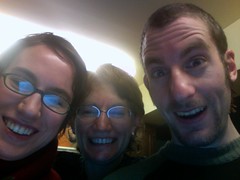 We tried to go running in the snow earlier, but it was too much and we retreated to plowed roads. Then we went into town and visited my grandparents' place for the traditional Christmas Eve feast, followed by an exchange of old stuff we'd found around our houses instead of the traditional Christmas Eve consumerism-fest. It was nice -- we all ended up with some interesting things which I don't think we'd have received otherwise. My mom got the book Thinking in Pictures, which I want to borrow, and Alex got One Flew Over the Cuckoo's Nest, which I'm told I should borrow. And I saw my aunt and grandparents for the first time in at least a year. They wanted to know what school was like, and I think I conveyed that things were going well, but it was really hard to explain what I was doing. I've gotta work on that.

We're back at home now. Maya

leadsynth and Dad decorated the Christmas tree, and I checked in the first few exercises in SICP chapter 2, and here I was all planning to brag about it, but I just looked over Alex's shoulder and he's doing it in Haskell, so never mind. Time for a long winter's nap, and tomorrow we open stockings and eat some more food. Merry Christmas!