The beast with two Macs 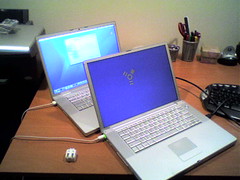 I'm going to call the new one ledeuxmachina, I think. Because dual-core. Because lagniappe was its predecessor and I want to continue the French thing. And because it's only for four and a half months, which is precisely the length of time I can deal with being the sort of person whose computer is named after a Smashing Pumpkins song.