As advised by Peter

pmb, I spent the first two weeks of my summer break in Atlanta with Alex

oniugnip and didn't do any computer science at all. Instead, I slept late, baked cookies, and went running almost every day. By day three, I was feeling pretty good. I felt so good, in fact, that I ran in a track meet!

All right, so it was an all-comers track meet, and I was competing against middle-school kids and senior citizens, but you have to understand that the last time I was in a track meet, it was ten years ago. I was seventeen and in high school. I did it then because it was the only sport I was halfway okay at, and I wanted badly enough to be the kind of person who was halfway okay at some sport that I kept doing it even though I really wasn't having a very good time. I never imagined I'd do it again voluntarily. There's a reason why almost all the races I've been in for the last several years have been marathons -- it's that anything shorter is too hard. I'm slow, but in a marathon you can be slow and still feel accomplished. If you run a marathon, your friends think you're cool just for finishing.

At a track meet, it doesn't work that way. I was going to have my ass kicked in the 1600 meters, and I wasn't particularly looking forward to it. But I did it anyway, and you know, it was actually kind of fun. Alex was there in two, three, four places each time I came around the track, dashing from corner to corner of the infield, cheering me on with seemingly boundless energy. I wouldn't be surprised if, between cheering for me and cheering for Mark

markluffel during his heat of the mile (which, unlike mine, was one of the fast heats), Alex actually covered a mile on foot himself. He yelled lots of encouraging things, but -- and I'm not particularly proud of this -- I felt most encouraged when, during the third lap, he nodded toward the guy running ahead of me and quietly said, "You can pass him." And I did. I finished in 7:45, not in last place, and only a minute or so slower than my best time in high school. Not bad. 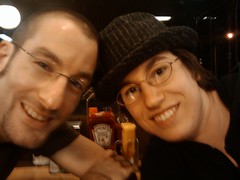 I resumed being slothful for the rest of my two weeks in Atlanta, at the end of which we packed up some of Alex's belongings, mostly books, and drove from Georgia to Indiana in a mostly leisurely fashion. Naturally, the trip entailed a stop at Waffle House. We had hash browns and coffee and the waitress asked Alex to explain what was on his shirt, which he sincerely tried to do.

When we arrived in Bloomington, we moved Alex's boxes into my apartment and then spent a few days shopping for a house. (There -- the secret is out!) Nothing's certain yet, but one way or another, we have to move out of my apartment by the end of July. There are a lot of nice things about my place, but it's a little small for us both, and anyway, we can't stay there because his cats aren't allowed.

Now my summer research gig has gotten underway, and it's only a matter of weeks before Alex comes here to go to grad school with me, which will mark the end of twenty months of Dating Remotely. I can deal with being in Bloomington when he's in Atlanta, which is how it usually is, these days. At the moment, though, I'm in Bloomington and he's in Mountain View, and somehow the three-hour time distance feels lonelier from the later side. Like I'm always waiting for him at some future point in time which I can't return from and at which he can never arrive. Or, um, it's possible that I may have just read Speaker for the Dead and it's making me ridiculously oversentimental. Damn it, this is not the kind of person I want to be -- I mean the oversentimental kind of person as well as the kind of person who stays up all night reading Orson Scott Card novels instead of doing research or, you know, sleeping. Curse these eight boxes of Alex's books that have taken up residence in my living room, and the plane ticket stubs with his name on them that fall out from between the pages and make me miss him so fiercely.