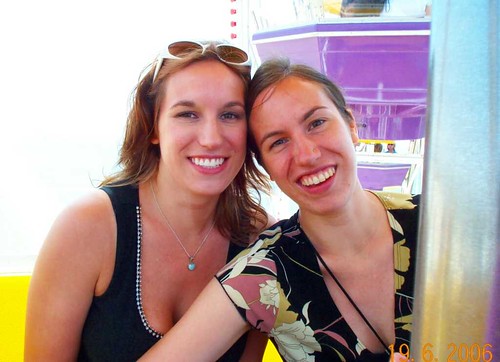 Some of my friends in Portland were surprised that I was going to L.A. (Roy: "You mean, on purpose?") Even the cab driver who took me to the PDX airport made a rude noise when he heard where I was headed. But the thing is, I...didn't hate it! My aunt Laura, the only one of my family who actually lives in L.A., did an admirable job entertaining my grandpa Joe and his wife Joy, my aunt Carol and younger cousin Mitch, my sister, and me -- a group whose ages range from 12 to 78 and whose interests are just as diverse. We ended up turning down Disneyland in favor of exploring parts of the city: downtown, Hollywood, Pasadena, and Santa Monica.

My favorite part was the beach. Before we went to Malibu on Sunday, it had been fourteen years since I'd been swimming in the ocean, and I'd forgotten what it was like: salty, roaring, and entirely unlike swimming in a pool. The receding waves pull you out while the advancing ones push you in. I was glad I hadn't gone bikini shopping, not because I didn't want to wear one, but because there was no way it would have stayed on. The only part I didn't like is that, instead of walking out of the surf trailing long green strands of kelp around my ankles, I walked out of the surf trailing a long white strand of curling ribbon attached to a popped balloon. That wasn't so cool.

Now I'm back home, getting ready to start my new job very soon. Woohoo! I'll be working together with a small, fantastic team of developers here in Portland to create online textbooks for a New York publishing company. My reading list just got a whole lot longer, and I couldn't be more excited.